First there was the Word. Then the understanding and finally, the FAITH! 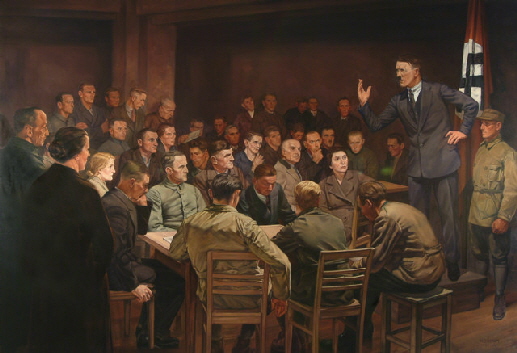 I was reading an article entitled “National Socialism as Religion” by Dr. Thomas Schirrmacher: a German member of the World Evangelical Alliance and therefore a nemesis of National Socialism. However he gives us, as a German, an interesting explanation on “Heil Hitler!” (note: my research did not confirm Schirrmacher as having Jewish lineage.)

An interesting passage states “only a few non Germans realize that 'Heil' is the German word for 'salvation', which is extensively used in the German Bible translations. ‘Salvation Hitler' or 'Salvation through Hitler' was the daily message that every German, including nearly all the Christians, preached to his neighbor daily. Although some tried to explain 'Heil Hitler' as wishing salvation for Hitler, the official meaning was clear: Hitler is the salvation for Germany and for the world.”

National Socialism is a religion, born out of blood and race, as well as a world-view. It is a true religion, created out of a Nordic spirit and an Aryan soul.

The political-religious ‘articles of faith’ that are presented in Mein Kampf as the core belief of National Socialism can be understood as the manifestation of the essential religious character.

In these challenging and exasperating times of Jewish-Marxist egalitarianisms we Aryans must embrace “THE FAITH OF THE FUTURE.”

A basic understanding of the National Socialist Religion